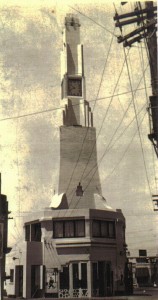 HISTORY OF THE TOWER BAR

An Architectural and Historical Survey

The Tower Building is located at 4757 University Avenue, lot thirty four block one of the Fairmont Addition Re-subdivision. The Contractor was David H. Ryan. The architect is unknown. Originally designed as part of a theater, The Tower was built as a drive-in soda fountain in the fall of 1932. As first built, The Tower was an octagonal structure. It was glassed-in, and had swinging double doors on five sides. It contained a central kitchen and a circular counter. The second floor was a glassed-in observation deck.

The support of the Tower comes from four 16″ by 16″ white spruce pillars originally intended for use in an asphalt plant. These pillars were pulled into position by Mr. Ryan’s Lincoln Roadster. They are anchored in place by strap iron which is sunk into ten concrete piers which for the building’s foundation. The flooring is slab concrete. The roof is composition. The parking lot was bricked, but these were removed in 1946 and used to make the low wall which runs along the eastern edge of the property.

The most distinctive feature of the Tower is the 110′ hollow monumental pylon which crowns the top of the building. The pylon is a wooden dental extension which resembles a model of the Empire State Building. The pylon has since been shortened by four to six feet in order to make it more easily accessible for maintenance. It originally had a clock on each of its sides, but these were removed because children repeatedly shot out the plate glass on the clocks’ faces with pellet guns and slingshots.

The architectural style of the Tower is Zigzag Moderne, sometimes called Art Deco. Zigzag Moderne developed from the classical-inspired designs of Bertram B Goodhue, the vertical Gothic schemes of Eliel Saarinen, the forms of the Paris Exposition des Arts Decoratif of 1925, and the early twenties designs of Frank Lloyd Wright. It was also influenced by the developing International style. The principal characteristics of Zigzag Moderne are: smooth surfaced volumes; windows arranged in sunken vertical panels; frequent use of central tower, whose summit recedes in a stepped pattern; a flat roof; symmetry and balance for each elevation; tendency for buildings to be monumental, formal and heavy; ornamentation of zigzags, chevrons, sunbursts, spirals and stylized plant and animal motifs. The land on which the Tower is situated was occupied during the early part of the century by a small frame house, This house was moved to 4762 when the Tower was built. In the twenties and early thirties the house was used as an office by Adamson Realty Co. The property was owned by a series of speculators including Edward Summers, who was a realtor known as “The Bungalow King”.

The Tower has remain in the David H. Ryan family since it was built. The Ground floor has always been some sort of eating establishment, and the upper floor used at times as a beauty shop. The 32′ long rectangular east side addition was constructed in 1948. At that time the octagonal part of the Tower was enclosed with frame stucco. The flooring of the new addition was asphalt tile. Booths were installed along the walls and the restaurant was located there. The octagonal part of the building was used as a bar.

This arrangement was reversed during a remodeling in 1964. The remodeling was necessary because a car went out of control and crashed through the front section of the building. In 1973 the upstairs was converted to the restaurant kitchen. Access to the restaurant is by means of a dumbwaiter.

The Tower is structurally sound and in quite good condition, except for peeling exterior paint. The present lessee and proprietor of the restaurant, Mr. Jerry Davis, hopes to convert the section of the roof above the east side addition into an outside dining patio by the summer of 1979. 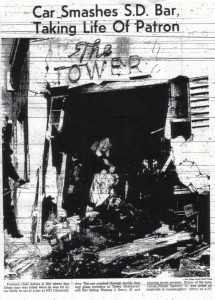 One person was killed and seven were injured yesterday when a car crashed through the front of an East San Diego cocktail lounge and slammed into the bar where several patrons were sitting.

The car crashed through the double door and glass entranceway of the Tower restaurant and bar at 4757 University Ave. Thomas J Seery, 47, of 4079 Euclid Ave was killed when he was crushed between the car and bar, Deputy Coroner Max Murphy said. Seery’s wife, Catherine, 43, was hospitalized with multiple injuries.

The driver, James Nelson Spencer, 51, an auto mechanic, of 4151 35th St, was jailed on suspicion of manslaughter and felony drunk driving. He suffered minor injuries.

Police said Spencer’s car was eastbound on University Avenue at high speed when it ran a red light at Euclid Avenue, was struck by another car and veered off into the bar.

The doors and glass front of the bar were shattered. The bar was crumpled and shoved against a back wall. The entranceway of the building faces the corner of University Avenue and Reno Street on an angle with the bar running behind it parallel to University Avenue.

J.C.Wagner, co-owner of the bar, said the car crashed through the doorway, sending glass flying and continued on down along the bar, crumbling it and running down patrons.

Police blocked off University Avenue between Euclid Avenue and 48th Street as more than 300 persons gathered at the scene. All traffic was rerouted to side streets around the accident scene for nearly one half hour. Seery was owner of a tile shop at 3889 Euclid Ave.

Police knocked a hole in the opposite wall of the building to pry the car away from the bar in order to free Sumner who also was pinned. He was the most seriously injured of the six taken to the hospitals, police said.

Click here for Historic photos of The Tower Bar 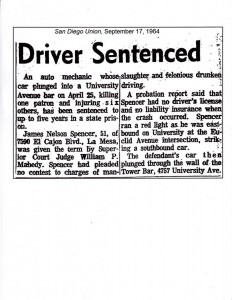 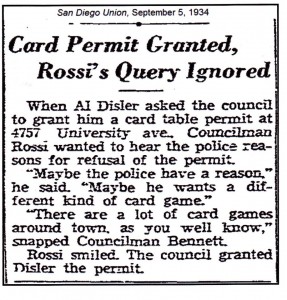 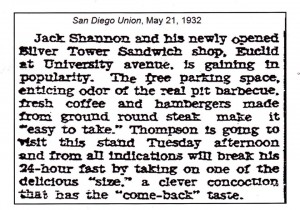 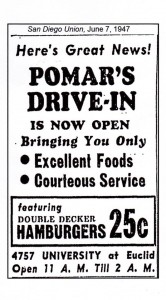 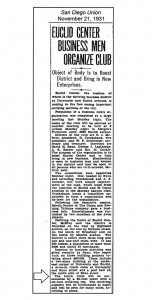 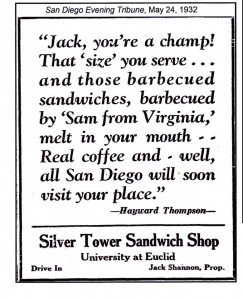 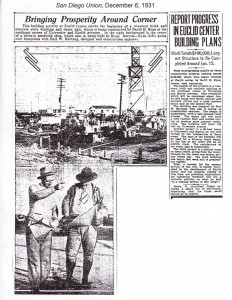 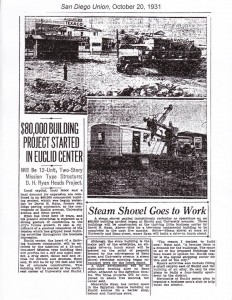 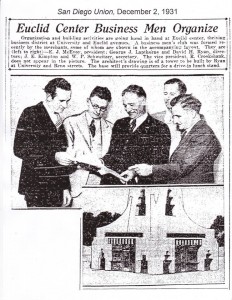 SOME HISTORY OF CITY HEIGHTS

In the 1880s, American entrepreneurs Abraham Klauber and Samuel Steiner purchased over 240 acres of unincorporated land northeast of Balboa Park hoping to profit from the area. Together they named it “City Heights,” though it was also known as the “Steiner, Klauber, Choate and Castle Addition” after the earlier developers of the property. The area was subdivided, and on November 2, 1912, eligible area voters voted to become an incorporated city known as East San Diego. Population boomed in the next few years from 400 in 1910 to 4,000 during the incorporation.

There is still a Klauber Avenue to the southeast of City Heights, the neighborhood Klauber was instrumental in founding. In City Heights itself, Klauber Street was renamed to Wightman, but the old name can still be seen engraved in the sidewalk in some places, as it is a custom in San Diego to preserve the original markings when repaving the sidewalks. Klauber/Wightman St. is one block south of University Ave, which was originally named after Klauber’s partner Steiner.